‘They can change the world’ 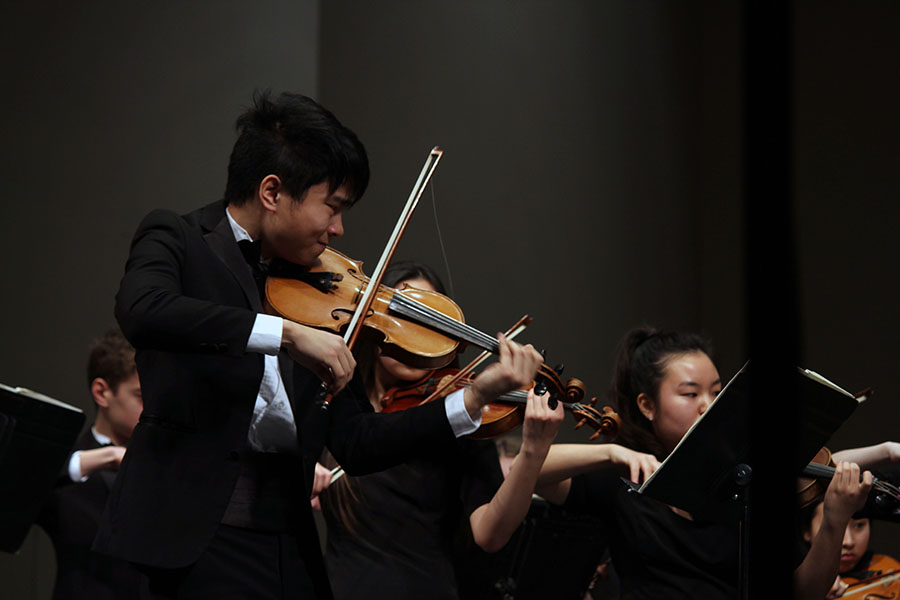 Senior Allen Zhang plays intensely to Shostakovich's String Quartet No. 8, which is meant to express both the sadness and anger he felt during the World War II era. His self-written requiem required that the Chamber Orchestra play aggressively, resulting in broken bow strings.

“I seriously hope that you do,” responded orchestra director Nate McClendon.

As I tiptoed out from behind backstage in the subtlest way I could manage, I snuck into the third row, bracing myself for what I was about to hear. Manhattan High’s Chamber Orchestra followed suit with McClendon standing at the podium, already breaking rules set by the Kansas Music Educators Association, ready to play String Quartet No.8 by Dmitri Shostakovich.

The one Kleenex I had in my pocket stayed there, waiting to see if McClendon’s hopes would come true. They did.

“Empathy is the ability to feel, to be in the same place as someone else,” McClendon said, “and music has an amazing way of doing that. You can listen to music and actually feel what that person, that performer, or that composer is feeling… it’s kind of mystical if you will, but I believe in that power.”

“Looking around at everybody, everybody looked so sad,” senior Grace Hart, first viola, said. “It really felt special to be a part of it.”

The impact Shostakovich’s work creates is exactly why McClendon chose it for the group’s performance at the Kansas Music Educators Association conference. He didn’t want people to think, “Wow, this group is amazingly talented.” He wanted then to know what it meant to feel — what it meant to express anger, despair and hopelessness — beyond what words can say.

“There’s another reason that we listen to music, but sometimes as performers we get caught up in the making,” McClendon said. “What they did was they brought to life every emotion that the composer put into the music and they added their experience and their selves and that’s what the audience heard.”

The piece’s importance is also reflected in Shostakovich’s purpose for writing it. MHS has felt the effects of teen suicide and the group sought to change the adult perspective by showing them how it feels. With Shostakovich’s mentality, his self-written eulogy was supposed to help Chamber show the turmoil of being so emotionally distraught that a person doesn’t know what else to do.

Because McClendon didn’t direct them in order to see their ability to trust each other, the group had to count on each other’s breathing and movements to keep track of when they played. However, their movements also reflected what the music was trying to express — jerking forward during moments of hard anger and leaning back softly during moments of sadness.

“Sometimes I lose control of how angry I get,” Hart said. “I put my whole body into it and I kind of scare myself sometimes.”

Their effort changed everything. From the audience, McClendon sat with his chin in his hands, staring at the kids who had done what the other adults had yet to wrap their minds around.

As they filtered off stage, McClendon stayed behind, taking his time to walk back into the underground dressing room. An older man — tall with a big old full beard dressed entirely in black — tossed his smoking cigarette aside and ran up to the sweaty non-director.

“Are you the director for Manhattan High School?” he asked.