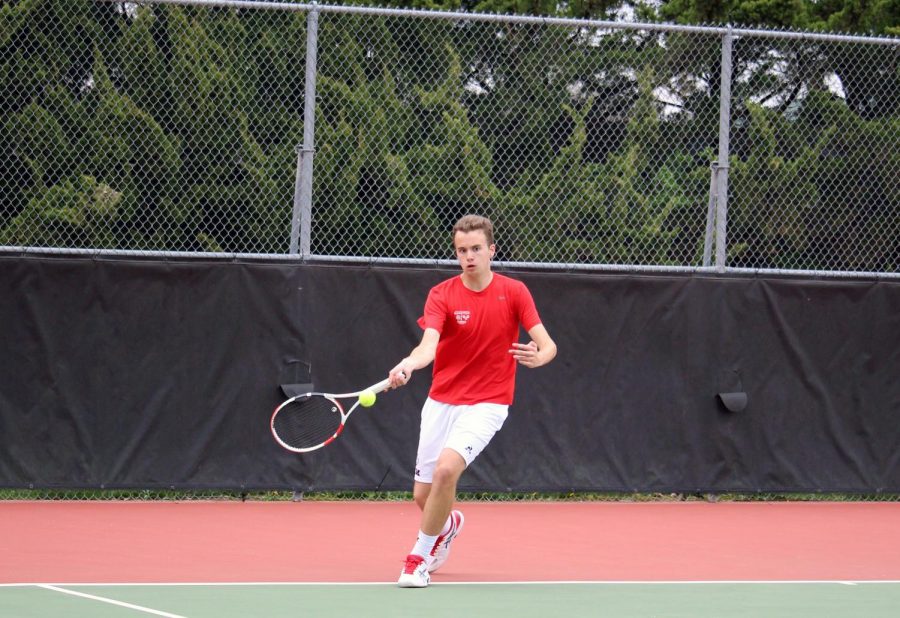 The Varsity boys Tennis team went 11-1 in their first tournament of the season, gaining them first place at the meet and second overall in the 6A league. Last Tuesday at Kossover Tennis Facility, the top six boys played Topeka High, Topeka West and Washburn Rural in the quad, setting a record with only one match lost in the entire tournament.

“I think the energy was there,” senior Jonathan Grove said. “I think overall it’s gonna be a difficult year in terms of what we’re expecting from some of these teams but I think we’ll get it all together and we’ll see what goes from there.”

Although the weather wasn’t ideal, the Varsity boys made due. The wind, rain and coolness of the match had affected how the boys played, as well as the bounce, spin and placement of the ball.

“When we got to the facility, it was super cloudy and windy,” junior Jackson Ivester said. “It started raining within the first five minutes and all of us knew the weather would be absolute dog water.”

As far as goals go for the season, everyone has the same main goal, which is for all six of the players to qualify for State.

“I think our goals are simple and clear — this is probably one of our best years to win a State championship,” Grove said. “With the amount of talent we have, I think we really need to put in more work every single week, in terms of conditioning, practicing our strokes and consistency. We also want to compete and have fun, because we didn’t have the opportunity to do so last year.”

Having a good mindset in tennis is a crucial part of winning every game, set and match.

“[If] I get in my own head after we lose a point, I [can] break down in the middle of a game, and nothing good ever comes out of that,” Ivester said. “That’s why I really like playing with Ranaweera in doubles, he always sets me back into place and tells me to move on to the next point because there are no do-overs.”

Because boys tennis season is in the spring, they were one of the seven sports that got their season taken away by the COVID-19 pandemic. Not just the Varsity team, but all of the 24 athletes are  happy to get a season with most of the top players still able to play.

“Last year was probably our biggest chance of winning the State title, but I think this year is proving that we’re still on top in the state of Kansas,” Grove said. “Battling these teams that we didn’t have the opportunity last year is going to be an obstacle of its own. There’s going to be a lot of teams loaded and mad hungry after what COVID did to us — they’re going to be competing for 5A and 6A championships, so we’ll just have to do our part as well.”

The Varsity boys tennis team plays their next meet at 3 p.m. in Olathe on April 14.